A DMTC project team has successfully demonstrated a novel approach to accelerating the production of satellite components using advanced manufacturing techniques such as 3D printing and aerospace investment casting. DMTC collaborated with UNSW Canberra Space, CSIRO, La Trobe University and industry partner AW Bell on a project to research, design, test and manufacture a cubesat chassis and the optical mount. The imaging payload assembly (IPA) mounted on a composite Ti-6Al-4V/Invar36 optical mount, produced by CSIRO, successfully launched into orbit in March.
The project commenced in 2018 and has made a number of significant technical breakthroughs as well as leaving a lasting legacy in the form of a sovereign capability to additively manufacture space components in Australia.

The use of investment cast invar and hybrid alloys via additive manufacturing directly addresses a major challenge in the development of small satellites These structures have to withstand the environmental conditions and temperature variations experienced in space. The stability of the structure under extreme conditions is critical to the performance of the cubesat’s payloads that produce and deliver mission-specific data.

Extreme thermal stability characterise the material compounds selected for this project. This makes them well suited for applications where sensor thermal drift is a major challenge. 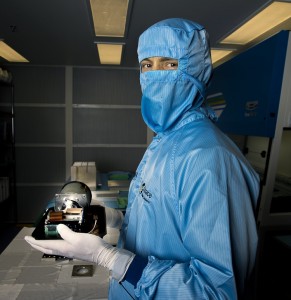 CubeSat components were produced using 3D printing. Cast components were built in plastic printed directly from CAD data using a commercial SLA printer. These were then used as sacrificial patterns and processed as thin-wall investment castings in invar by AW Bell. Titanium/invar hybrid components were printed using a range of 3D printing capabilities, including electron beam melting and cold spray, at CSIRO’s Lab22. Particular focus was on optimising the thermal expansion to the lowest value achievable, over a temperature range from around -150 to +150°C, to demonstrate its suitability for satellite and space applications.

UNSW Canberra, CSIRO and AW Bell collaborated to design the CubeSat chassis and optical mounts, after which AW Bell and CSIRO commenced manufacture, drawing on the results of a La Trobe University literature review. AW Bell’s foundry in Melbourne is the only facility in Australasia to have AS9100 certification for aerospace and space components. In addition to conducting finite element analysis, UNSW Canberra conducted extensive metrology and vibration testing on the manufactured components to validate the design integrity and simulate the effect of launch conditions.

The M2 CubeSat is the third of three satellites developed by engineers and researchers at UNSW Canberra Space, supported by funding from the Royal Australian Air Force. This latest mission follows the successful launch and mission operations, to date, of the M2 Pathfinder CubeSat last year.

They go up so fast
The technology demonstrator CubeSat from UNSW Canberra Space is part of an international constellation of small satellite payloads launched from New Zealand’s M?hia Peninsula on 22 March. The ‘They Go Up So Fast’ mission was Rocket Lab’s 19th Electron launch overall and second mission of 2021. The launch brings the total number of satellites launched by Electron to 104.

UNSW Canberra Space Director Professor Russell Boyce says the M2 satellite will be used for maritime surveillance as well as building block demonstrations of various sensors, communications and onboard processing.

“These versatile small satellites have re-programmable software defined radios on board and can change their purpose mid-mission, greatly improving their functional capabilities for multiple uses by Defence and civilian users alike,” Professor Boyce says.

Sovereign capability
This project is a further demonstration of the capacity and expertise of Australian industry and research organisations to meet a growing demand for high-performance small satellite structures and componentry.

DMTC CEO Dr Mark Hodge says DMTC’s involvement in technologies of interest to the space industry is an example of the flexibility and scalability of the national reach and relevance of DMTC’s collaboration model.

“We’re not just interested in research for its own sake. We take ongoing guidance from government stakeholders on areas of demonstrable capability need in and beyond ‘traditional’ Defence domains,” Dr Hodge says.

“This project is a great example of bringing experts together from across Australia’s industrial and research sectors to achieve great outcomes.”

The full article is available on Pages 51 and 52 of the Australian Space Outlook 2021 publication.